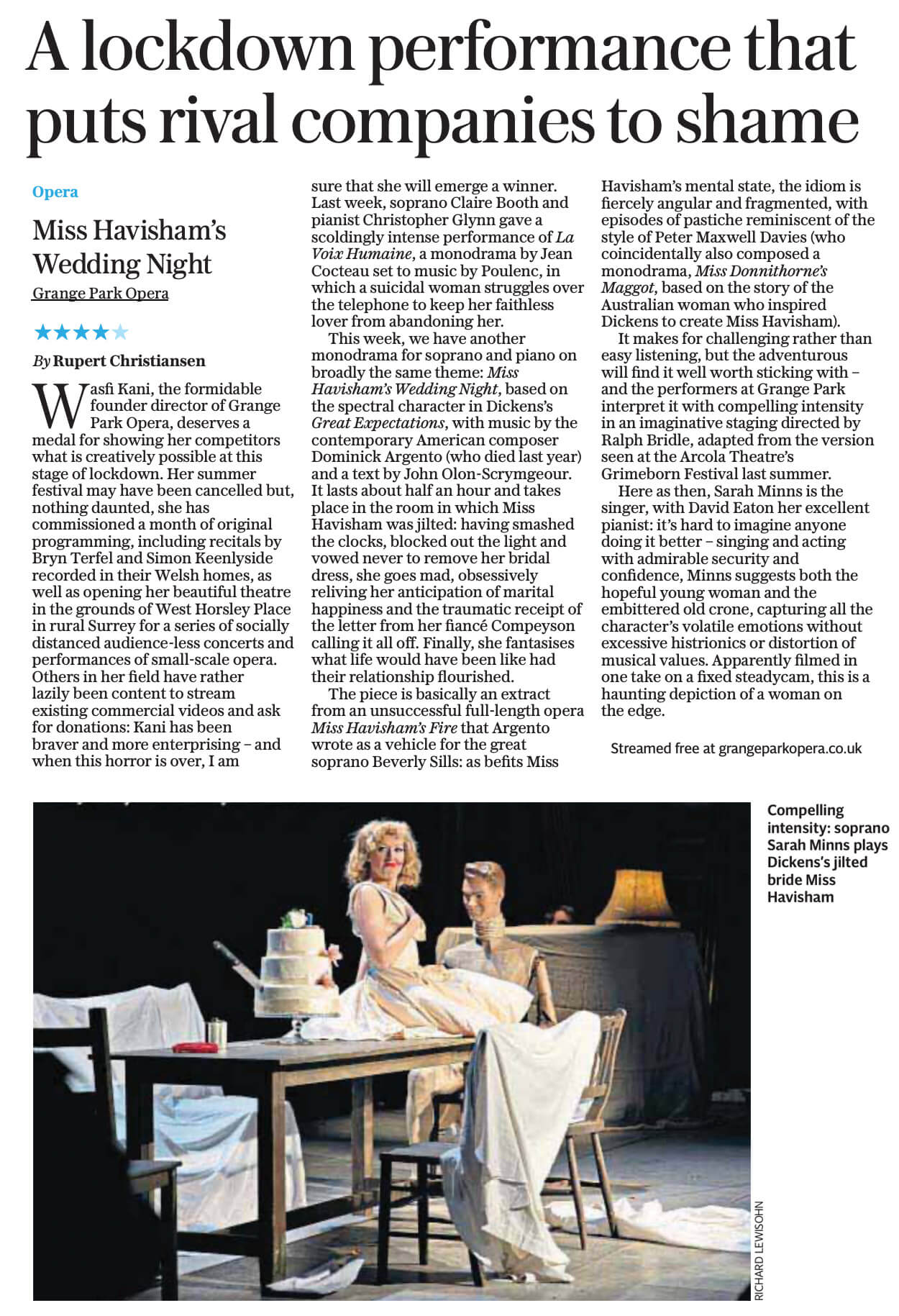 A tour de force solo performance from talented soprano Sarah Minns…to roll from one piece to another in minutes tests both acting and singing, and the Arcola’s smaller space allows no room to hide, but Minns simply relishes this: her confidence and focus carry all before her, keeping the audience in the palm of her hand as she traces Miss Havisham from her memories as an excited ingénue in cream silk to a haggard, trembling alcoholic…by the end, shaking with emotion, smeared with lipstick and blood, Minns can purr, sneer or howl – we are equally mesmerised. This is what Grimeborn is all about, for me: vibrantly powerful, high quality opera at near-terrifying close quarters, tough but intriguing, with a few surprises tucked in for good measure. Guts, brains and, above all, beauty.Charlotte Valori, TheatreCat

Here I picked a corker in a superb double bill of American song-cycles for soprano: Aaron Copland’s 12 Poems of Emily Dickinson and Dominick Argento’s Miss Havisham’s Wedding Night…Sarah Minns, dressed as an all-American housewife of the pre-Betty Friedan variety, sang with clarity, accuracy, intelligence and perfect intonation while acting with subtle expressivity.Rupert Christiansen, The Telegraph

As Elle, soprano Sarah Minns wanders distractedly through it, a woman desperate to love. Self-deluding, self-dramatising, self-flagellating: Minns captures all these aspects of the character, but she also locates the profound feelings that drive her close to suicide. Pathos and bathos are held in perfect balance.The Evening Standard

Minns is in fine voice, her crystal clear diction making this intimate opera easy to follow. Poulenc’s 20th century score is emotionally a demanding piece for the audience, but the staging is well-paced and Minns’s energetic stage presence carries us through this 50-minute tour-de-force.British Theatre Guide

Sarah Minns is a singer of real promise.The Times

The role of Elle is sung by Sarah Minns, who brings to it a versatile brilliance. The colour of her voice changes in different registers, and she uses this to the full.Musicomh

La voix humaine is a taut psycho drama demanding above average acting skills, and the stamina to hold intensity without respite for over an hour. Not many singers can pull it off well,  but Sarah Minns almost certainly can. She’s an exceptionally good actress, as well as singer, and has made a speciality of operatic one-handers, including two UK premieres: Katarzyna Brochocka’s The Young Wife and even better still, Manfred Trojahn’s Rilke song cycle, Insomnia, about Lou Andreas-Salomé, the mysterious woman who captivated Nietzsche, Freud, Rilke and Paul Rée.  Trojahn’s piece is fairly well known in Germany, though not in Britain….Minns didn’t just steal the show: she “was” the show, creating Andreas-Salomé’s mysterious, compelling personality to perfection.  On stage, she “became” the part so convincingly that it was a shock to see her later without costume and makeup, chatting happily like a normal person.  Art and reality!Classical Iconoclast

Flamboyance arrived in the form of Musetta, Marcello’s occasional girlfriend, played by Sarah Minns. Dazzling in red, Minns sang in her distinctive soprano whilst clambering on chairs, cackling heartily and perching on the knee of an unsuspecting audience member. And all in formidable heels. It was fun and chaotic, and it’s not every day an opera singer performs a nineteenth-century score inches from your glass of house white.The London Magazine

Young Wife is impressive. It’s a continuous monologue from a woman (played by Sarah Minns) disappointed with married life. A Madame Bovary-esque sense of disenchantment bristles through her arias – at times sharp and aggressive, at others soothing and contemplative. It’s an unforgiving role for soprano, and Minns enthralls. If she finds the part a challenge, she doesn’t let us in on the secret.Fringe Opera

Sarah Minns as Dido conveyed her gravitas and depth of her reined-in passion most effectively…What we heard was not mere elegiac beauty but heartfelt grief.Opera Now

Sarah Minns is one of the most capable actors in classical singing in London.Classical Iconaclast

Powered by HighThemes. All rights reserved.